India vs England Third Test at The Oval 2007

India vs England Third Test at The Oval 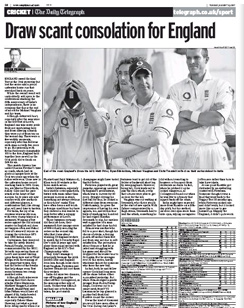 In Picture: Newspaper reports about Indian victory.
India deserved their 1-0 series win against England after the third Test ended in a draw at The Oval, captains Michael Vaughan and Rahul Dravid said. Kevin Pietersen cracked 101 for his 10th Test hundred that ensured England saw the fifth day out safely on 369 for six after being set a world record victory target of 500. India were jubilant after stumps were drawn even though they had failed to win the match as they had managed their first Test series win in England for 21 years, emulating Kapil Dev's team in 1986.
It also ended Englands unbeaten six-year run at home.

England were 56 for no loss in their second innings at stumps on day 4 of the third and the final Test match against India. All the 10 wickets of England are intact as Indian bowlers failed to make hay on the dead pitch at the Oval. Andrew Strauss and Alastair Cook were on the crease with 27 and 23 runs respectively.
India declared their second innings on the score of 189 runs for 6 on day 4. India attained a lead of 499 runs and gave110 overs to England to complete the target of 500 runs.
Reported Earlier: England hit back with three early second-innings wickets as India stuttered to 35-3 at lunch on the fourth day of the third and final cricket Test.
In reply to India's first-innings 664, England lost the wicket of Monty Panesar this morning to be all out for 345 at the Oval in south London. The visitors are 354 ahead, with lunch being taken early because of rain.

England ended day three of the Oval Test facing the prospects of a follow on as they finished on 326 for 9, needing a further 139 runs to make India bat again.
Opener Alastair Cook, who was dropped twice enroute his first fifty of the series made 61 before he fell to Anil Kumble. The Indian ace then snapped skipper Michael Vaughan in the last over before lunch to set the cat among the pigeons in the England camp. India smelled blood when England were reeling at 124 for 4 at lunch and with Kevin Pietersen (41) playing with responsibility while sharing a stand of 78 with Paul Collingwood(62), Indians were kept waiting.
Pietersen was removed by Tendulkar just before tea, but Collingwood added 86 with Ian Bell, who top-scored with 63, but both fell within five overs. With only one more wicket to pick, India have written a perfect script to enforce the follow-on as the overnight rest will give the bowlers perfect tonic to come fresh on the fourth morning to unleash their furor.
Reported Earlier: Rudra Pratap Singh provided the first breakthrough of the morning as nightwatchman James Anderson was declared LBW by umpire Ian Howell. Anderson did his job gracefully as he made 16 runs from 48 balls before getting out.

In reply to India's mammoth total of 664, England were 24 for 1, a trail of 640, at close on Day 2 of the series decider final Test at The Oval.
India's ace leg-spinner Anil Kumble scored his maiden Test hundred in the post-tea session on the second day of The Oval Test against England on Friday, as the tourists were bowled out for 664 in 170 overs. Kumble reached his hundred when the team total was 636 for 9 in the 165th over and remained unbeaten on 110.
Last man S Sree Santh, who scored a breezy 35 and put on 73 for the final wicket, ensured that England were left frustrated. Kumble's previous Test highest was against South Africa when he scored 88 at Kolkata's Eden Gardes during the 1996 series.
However, in the present Test and the series, Kumble is the only Indian batsman to have scored a hundred. Dinesh Kaarthick 91, Mahendra Singh Dhoni 92 and Sachin Tendulkar

82, approached the three figure mark but could not complete their hundreds. Reported Earlier: India's batting maestro completed his 45th Test fifty on the second morning of The Oval Test match against England.
Resuming on 48, Tendulkar picked two singles to move to 50 off 137 deliveries while India added six more runs to their overnight score of 316/4.
After 92 overs, India were 322 for 4. Tendulkar, who was our for 91 at Trent Bridge in the second Test match, will surely be eyeing a hundred at the Oval.

India ended the opening day of the final Test at The Oval on a commanding 316 for 4 as England bowlers were made to toil on a placid wicket.
At stumps, Sachin Tendulkar

was unbeaten on a patient 48 and giving him company was VVS Laxman on 20.
Earlier, England captured two quick wickets after India had got off to a fluent start and were well placed at 211-3 by tea. Opener Wasim Jaffer fell before lunch for a breezy 35 off 47 balls. Dinesh Karthik was unfortunate to have got out on 91 as he looked sure to reach his second Test century, but the Tamil Nadu batsman flourished in the company of Rahul Dravid as the duo added 127 in 33 overs.
However, James Anderson produced a magical delivery that swung late to york Dravid, who made his 48th Test fifty and was out for 55. Karthik fell nine short of a second Test ton when he edged behind off Ryan Sidebottom. Later in the day, Tendulkar and Sourav Ganguly stitched a partnership of 77 before the latter was trapped leg before by Paul Collingwood for 37. Reported EarlierIndia captain Rahul Dravid won the toss and decided to bat first in the series decided third Test against England at the Oval. Pre-Match Report: The third and final cricket Test between India and England is set to start on time with the sun shining brightly at the Oval this morning. Having taken a 1-0 lead in the three-match series, the Indians are looking to break a 21-year-old jinx of winning a series in England and weather can play a crucial role in aiding their cause.
England team (from): Vaughan (Captain), Cook, Strauss, Pietersen, Collingwood, Bell, Prior (Wicket Keeper), Sidebottom, Anderson, Panesar, Tremlett, Broad.
India team (from): Dravid (Captain), Karthik, Jaffer, Tendulkar, Ganguly, Laxman, Dhoni (Wicket Keeper), Kumble, Zaheer Khan, Santh, RP Singh, Yuvraj Singh, Bose.

Sitting pretty on their 1-0 lead after the victory at Trent Bridge, India will be looking to end a 21-year-long drought of a series triumph in England as they square up against the hosts in the third and final cricket Test at the Oval here tomorrow.
Even as the likes of Sachin Tendulkar

, Rahul Dravid, Sourav Ganguly, VVS Laxman and Anil Kumble will be looking for their crowning glory moment in England -- being a part of a victorious Indian team -- in the evening of their respective careers, they need to take care of a jinx that has been plaguing the side in recent years.
Too often in the past, India has taken a lead in the series only to allow the opposition to turn the tables on them.
If a dream win in Adelaide against Australia in 2003 was followed by a soul-shattering defeat in Melbourne in the very next Test, India's first-ever Test win in Pakistan in 2004 at Multan was followed by a nerve-wrecking defeat at Lahore. More recently, India squandered a huge opportunity in South Africa early this year when, when after beating the hosts at Johannesburg in the first Test, they promptly lost the next one at Durban before losing the series in Cape Town.
"We have to be consistent. We have to back our good performances by some more good performances. We will celebrate this win, but at the same time, we will keep our mind focused on the final Test and on what we need to do there", Indian captain Rahul Dravid said.

India vs England Third Test at The Oval

India won the toss and decided to bat


India 1st Innings - All out

England 1st Innings - All out

Free Windows 8.1 App: The latest Cricket news from your favorite websites. You can also add new RSS feeds based on your interests to see them all in one place. Works on any device that supports Win 8.